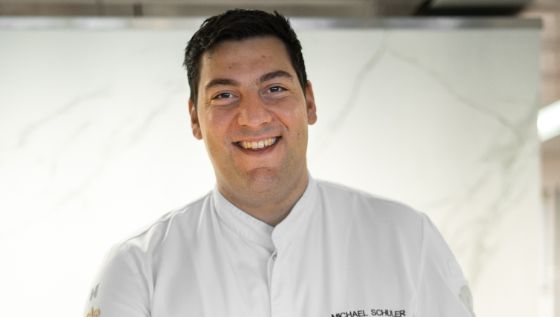 It is certain that the leading young chef from the German village of Sulz am Neckar won’t be bored in Thalwil: Michael Schuler is responsible for the small but neat AQUA as well as the à la carte restaurant and room service meals at the Alex Lake Zürich hotel. With its five tables, AQUA offers a particularly intimate setting for a fine dining experience that’s in a class of its own. With its extensive terrace and views over Lake Zurich, by contrast, the à la carte restaurant invites you to linger.

An ambitious young chef at the top

Aged just 28, Michael Schuler is one of the youngest top restaurateurs in Switzerland. Yet it shouldn’t be so surprising, as he learned his trade from the best. He completed his training in the Black Forest with Michelin-starred chef Jörg Sackmann, before spending five years working for award-winning restaurateur Stefan Heilemann – most recently as sous chef at the Widder restaurant. For Schuler, it is Heilemann who has had the greatest impact on his career to date: together, they discovered the cuisine of Thailand while traveling. The fusion between Asian cuisine, French classics and good quality regional products is more than a match for upscale cuisine, and it is impossible to imagine AQUA without it.

Schuler’s cuisine impresses with French classics that have clearly been influenced by his visits to Thailand. This refreshing combination as well as the skills of Michael Schuler and his team were recently recognized with the highest award – a Michelin star – as well as 15 GaultMillau points. Far more important to Schuler than awards, however, is his team, whom he is able to rely on each day. And American Express Platinum Cardholders are pampered even more quickly at AQUA: Platinum Travel & Lifestyle Service simplifies reservations at the frequently-booked top restaurant. You can also look forward to a special drink for a toast – a glass of exclusive Perrier-Jouët champagne awaits you.

Michael Schuler wants to reach as many people as possible with his creations, and with his Signature Dish Moules Frites, shows that outstanding taste experiences needn’t be complicated. The chef hopes that more people will venture into the world of seafood at home, too, and proves that any fears they may have are unfounded with his simple mussels dish. The​​ Moules Frites are prepared in a flash – creating a sense of anticipation for that next vacation on the Côte d’Azur.